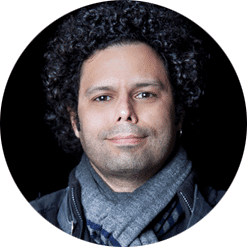 Concept, creativity & technology. 25 years of experience in creative departments of large agencies, leading international global brands. I am known for being a multidisciplinary professional, working on a variety of business models during my career: offline, branding, digital, brand experience & activation.

I’m passionate about challenges and skilled at setting up creative teams for business formation and expansion in a short period of time. When I think of a team, I strongly believe in diversity: people from different cultures, different genres and skills form the best equation for the best ideas. I enjoy working hands-on with all departments and I have extensive experience in creating concepts that last a lifetime. This, coupled with a wealth of experience in storytelling, makes me a highly competent structurer of ideas.

I’m an early adopter and opinion leader when it comes to innovation. I believe in technology as a religion and put my full energy into startups and ideas that change people's lives in a positive way. Many of my projects combine technology and creativity and I believe that this is the new way to communicate in the coming years.

As a screenwriter, I wrote 4 short films and I have 5 more projects under development including series, movies and a play. I have 9 awards. As a photographer, I am a collaborator of GettyImages Latam and Unsplash - with a milestone of 5 million views on my photos - and 9 times awarded in the FWA. As an author, I wrote a book called "Traumas and other things that do not go out in the bath", by RSC Publisher.

// MOVE ME SHORTFILM FESTIVAL, BELGIUM Official Selection (A piece of you) - 2015

AS A BOOK AUTHOR

TracyLocke is a brand new agency in Brazil and born with huge accounts as Heineken, Diageo, Burger King, Jhonson &Jhonson, Pfizer, Libbs, Sanofi, Claro, Etna, JHSF, and Itaú. My role was to transform TracyLocke into a powerful creative house and we achieved more than 15 international awards, 01 Effie Brazil - Bronze, Ampro Globes Awards - Grand Prix, and Agency of the Year.

2015. BETC had just opened a branch office in Brazil and I was already a fan of the work they did in France. As Creative Director, my first job was the Peugeot pitch, and after that victory and a few others, I saw the agency grow from 25 to 105 people in 1 year. My team consisted of 30 creative staff and we worked for Peugeot, Parmalat, Hering, and Pão de Açúcar. A year ago, BETC joined HAVAS, becoming a single agency. I was promoted to Executive Creative Director, leading a team of about 50 creative guys and working, in addition to the previous accounts, for Citroën, Parmalat, Reckitt Benckiser, PepsiCo, among others.

In 2012, I was invited to work at Tudo, an Omnicom Group agency, as a Creative Director. After a few years working with digital, I started to be very interested in the "internet of things". This wasn’t a “trend topic” in 2012, but I wanted to make creativity and technology one single thing. A great example of this was the "Heart Bell", made for Banco Itaú during the World Cup season.

In 2004, Brazil was starting its digital movement with the launch of Google in the USA. I realized that this movement would change communication forever and then I decided to move to São Paulo.

LOV (Dentsu Group) was my first entirely online agency. In addition, it was also the first time I held a leadership position in a creative team. I worked for Mitsubishi Motors, TAM Airlines, Sony Electronics, and NET (the biggest Cable TV company in Brazil).

My second step was One Digital (Publicis Group). It was my first job as a Creative Director, leading a team of 20 creative guys and working for Samsung, American Express, and Bradesco (one of the most powerful financial institutions in Brazil).

Then, I was invited by Fbiz and that was a great challenge. They were known for being a digital production company and our job was to turn it into an advertising agency. My first job was a pitch for Itaú (a large bank in Brazil) and the accounts of more than 15 Unilever products (Omo, Close-up, Hellman's, etc), the whole Gruppo Campari (Campari, Aperol, SKYY Vodka, etc) and Pepsico. In just 2 years, the agency was bought by the WPP group, becoming one of the largest online agencies in the country.

In 2003, I left Script Communication and the “offline world” to dedicate my time to the launch of Claro, one of the main telecommunication companies in Brazil. At GAD Design, my responsibility was to coordinate the naming studies and the brand’s entire communication language with the market and the consumer.

I started my career in 1996 as a Copywriter at McCann Erickson Rio, working for accounts such as L'Oréal, Esso (Exxon), Gillette, and MEC (Brazil Ministry of Education). I was then invited to join the team at Z+G Grey, where I worked with Smithkline Beecham, Levi’s, Furnas, and CSN. After a few awards, I became part of the creative group at Script Communication, creating for Repsol, Iguatemi Shopping, and Lance Daily Sports, among others.